I’m at the point where I’ve pretty much stopped asking most Sandy Hook deniers any serious questions, including those that may ultimately prove useful in illustrating the numerous, grievous flaws in their already dubious claims. This is partly due to the fact that the overwhelming majority of them are pathological liars, and I choose not to waste my time with their nonsense. But more so than anything else, it’s because they simply cannot or will not answer them. As an example, ask Wolfgang Halbig why he continues to use such blurry, low-quality copies of Shannon Hick’s infamous evacuation photos in his near-daily rambling, unsolicited e-mails and you’ll be treated to a wall of gibberish that not only fails to even acknowledge the original question, but attempts to cajole you into answering somewhere around fifty of his own. It’s what’s commonly known as a Gish Gallop, and it’s as exhausting as it is intellectually dishonest. But one question I do still ask from time to time – a question no one has attempted to answer as of this writing – is this: if the school closed in 2008, where did its ~633 students go?

That number is taken from Newtown’s own enrollment report for the 2009-2010 school year, as seen here: 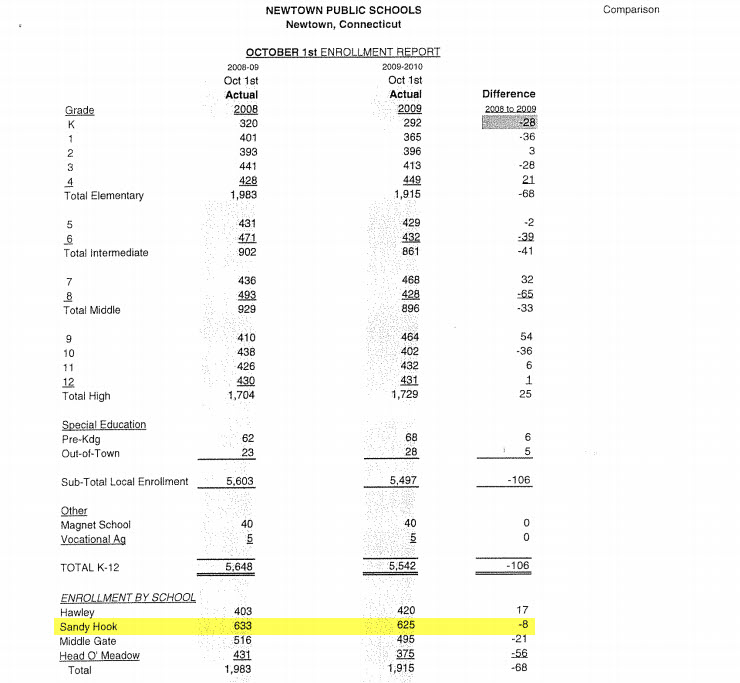 From at least 2008 through 2014, Sandy Hook was the busiest (at least in terms of enrollment) of Newtown’s four public elementary schools. At a time when the school is alleged to have been closing its doors due to declining attendance (which is still the case for all of Newtown’s public elementary schools), an imaginary “asbestos infestation”, or some other made-up threat, it had 117 more students than Middle Gate, and a whopping 230 more than Hawley. That’s a lot of students to displace, and while some of them obviously moved on to one of the district’s two intermediate schools, Reed and Newtown Middle School both show a drop in enrollment in between the 2008-2009 and 2009-2010 school years:

Admittedly, math has never been my strong suit, but this just doesn’t add up: Sandy Hook deniers want you to believe that 633 students simply vanished into thin air.

Of course the most obvious answer is confirmed by these very same enrollment reports: Sandy Hook Elementary School remained open and 625 students passed through its halls during the 2009-2010 school year, which would be a year after most deniers insist without evidence that the school was closed:

Enrollment reports (all from October, though other months are available) from subsequent years continue to show absolutely no gap ever in operations:

Here’s the report for the 2012-2013 school year, which is when the shooting took place:

As you can see, there were 456 students enrolled at the time. This is especially important because deniers routinely exaggerate this number. For example, on page 25 of his grotesque fiction, “Nobody Died At Sandy Hook”, James Fetzer claims that there were 600 students attending Sandy Hook in 2012. That’s 144 more than the reality! And on page 47 of the very same book, he dials that number down to a far more reasonable (yet still incorrect) 469.

And the information gleaned from these reports shines a light on another substantial flaw in the increasingly nonsensical denier narrative: when Sandy Hook School re-opened a short time after the shooting, where did its 432 (according to the January, 2013 enrollment report found here) students come from? Whether you understand the fact that the school was closed for a brief period of time and then relocated to the former Chalk Hill Middle School (and then moved again once construction on the new school was completed in 2016), or you mistakenly believe that it was closed in 2008 and then re-opened at its temporary location in 2013, I think it’s safe to assume that everyone agrees the school has been open and operational since January 3rd, 2013, right? At least I’ve never encountered anyone who has suggested anything to the contrary. So how was the school re-populated? Were the kids brought in from other area schools? Back in December of 2012, there were only 1,151 total students enrolled in the district’s three other elementary schools, so 432 would be somewhere around 38% of Newtown’s K-4 students. And predictably, the enrollment reports (seen above) do not reflect such a monumental change. In fact, the biggest net loss in enrollment at any Newtown elementary school in between December and January of 2012 (besides Sandy Hook) is a whopping one student from Middle Gate. So just a little ways off.

Jeez, that was a lot more math than I was hoping for. I’m sure someone will let me know if I fucked any of it up.

Comment policy: Comments from previously unapproved guests will remain in moderation until I manually approve them. Honest questions and reasonable comments from all types of folks are allowed and encouraged but will sometimes remain in moderation until I can properly reply to them, which may occasionally take a little while. Contrary to what some of you think, losing your patience during this time and leaving another comment in which you insult me won't do much to speed up that process.

The types of comments that will no longer be approved include the following:

1) Off-topic comments. Articles about The Internet Archive's Wayback Machine are not the place to ask about Hillary's e-mails or pizza shop sex dungeons. Stay on topic.
2) Gish Gallops. Don't know what a Gish Gallop is? Then Google it. And then don't engage in them. They are absolutely infuriating and there is no faster way to have your comment deleted.
3) Yearbook requests. Like I told the fifty other folks asking for them: I don't have them, and even if I did, I wouldn't post them. I'm not about to turn my site into some sort of eBay for weirdos, so stop asking.
4) Requests for photos of dead children. See above. And then seek professional help, because you're fucked up.
5) Asking questions that have already been answered/making claims that have already been debunked. If you want to have a discussion, don't make it paifully obvious that you haven't bothered to read the site by asking a question that I've already spent a significant amount of time answering. I'll allow a little leeway here if you're otherwise well-behaved, but please, read the site. There's a search function and it works fairly well.

And here are some more excellent resources for researching the truth behind what really happened at Sandy Hook Elementary School on December 14th, 2012: